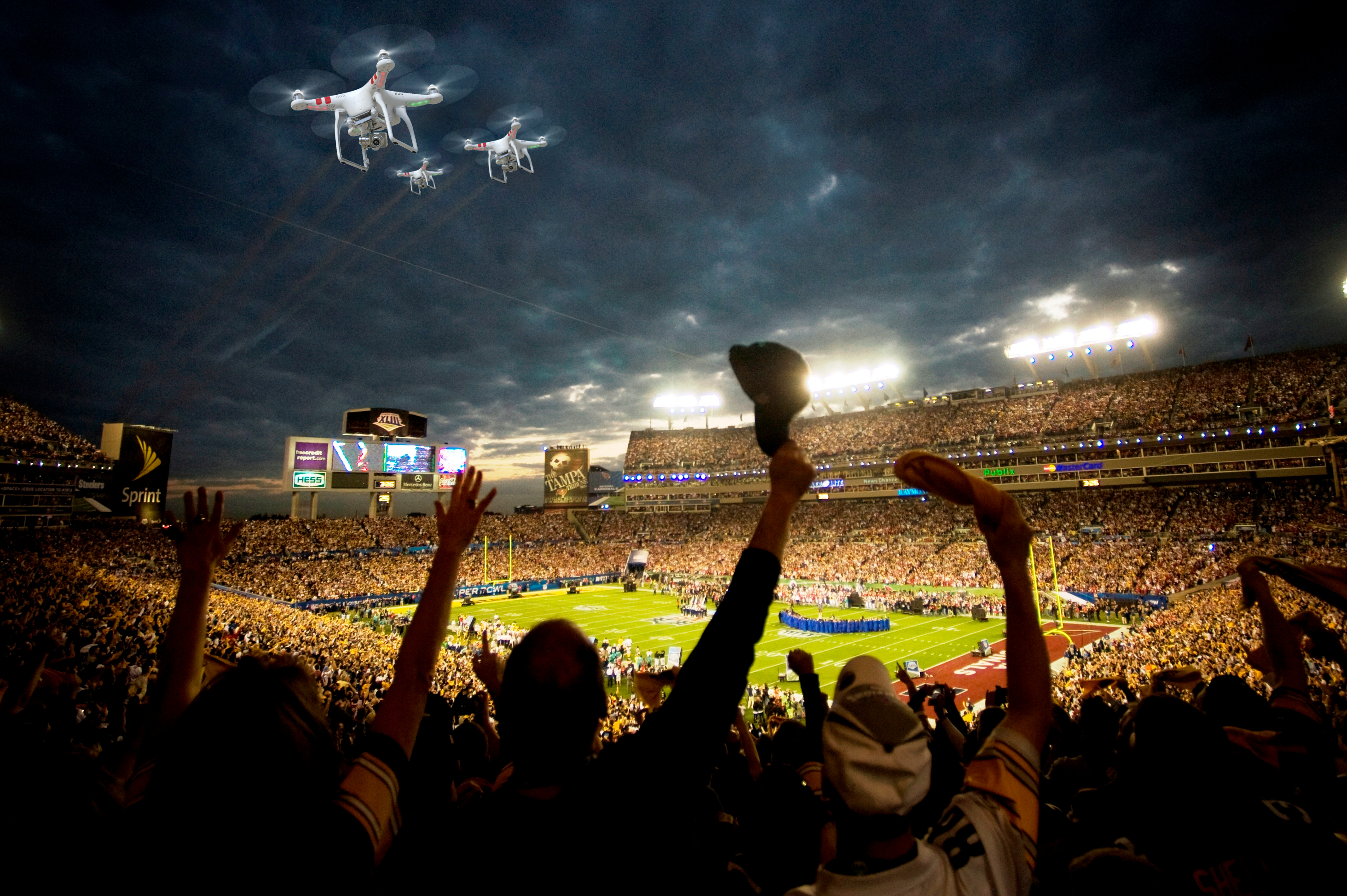 One of the hottest topics in sports technology today is the use of drones. Several major sports networks, professional teams and college sports programs have experimented with using camera equipped drones, or “unmanned aircraft systems” (UAS) either as part of the live production of sports programming or as a new and improved way to capture game film or practices.

From a technological standpoint, there is a lot to be excited about: new camera angles to enhance viewer experience, more exciting ways to market a sporting event, closer and more expansive imaging of practices and games. Yet there are also some concerns, chief among them the security risk posed by unmanned aircraft, including the possible use in a terrorist attack. In addition, a malfunction or wrong turn could send a UAS (some of which top out at speeds of 70 MPH and weigh over 50 pounds) into a stadium crowd, causing serious injury to spectators.

Flying drones over major sporting events requires a license and an exemption from the Federal Aviation Administration. Falling prices for drones, however, have made the devices more accessible to the general public and may present a looming problem, as recreational drone pilots do not need a license. Although it is illegal for an unlicensed drone pilot to fly over a stadium or other major sporting events, as recreational use increases, so too may the incidents of unlicensed, inexperienced individuals operating their drones near stadiums and arenas.

Several college teams and professional sports leagues have reported drones flying in stadiums or in stadium parking lots. Many times the reported incidents ended harmlessly. The pilot is found and the issue is quickly defused. According to a recent article in the Sports Business Journal, the FAA reported nine drone sightings near stadiums in 2014 – including six during live events. However, SBJ states that its own research shows that there were at least 48 drone incidents at professional sports stadiums in 2014, along with another six at college stadiums.

It is not just excited would-be pilots who are violating the no-fly rules. Recently, the Washington Nationals and the Dallas Cowboys were chided by the FAA for not getting the proper clearances before using drones – the Nats for a publicity shoot, the Cowboys for recording a team practice. As people go ga-ga over the possibilities of the new technology, there will undoubtedly be some (fan and team alike) who are so fueled with excitement that they will not pause long enough to learn the rules of the game.

As the proper use of drones increases, fans and teams certainly stand to benefit. However, the increasing use of UAS by non-license pilots poses a risk that cannot be ignored. Just how well the FAA and even state and local authorities will be able to regulate the use of drones remains to be seen. Until then the great opportunities presented by drones should not blind teams, leagues and networks to be the potential risks and dangers associated with sports’ Next Big Thing. This may mean teams and leagues may have to develop, enforce and adhere to their own no-fly rules, and that they make sure that in the mad rush to the technological mountaintop, they do not ignore the potential dangers lurking in the valley.