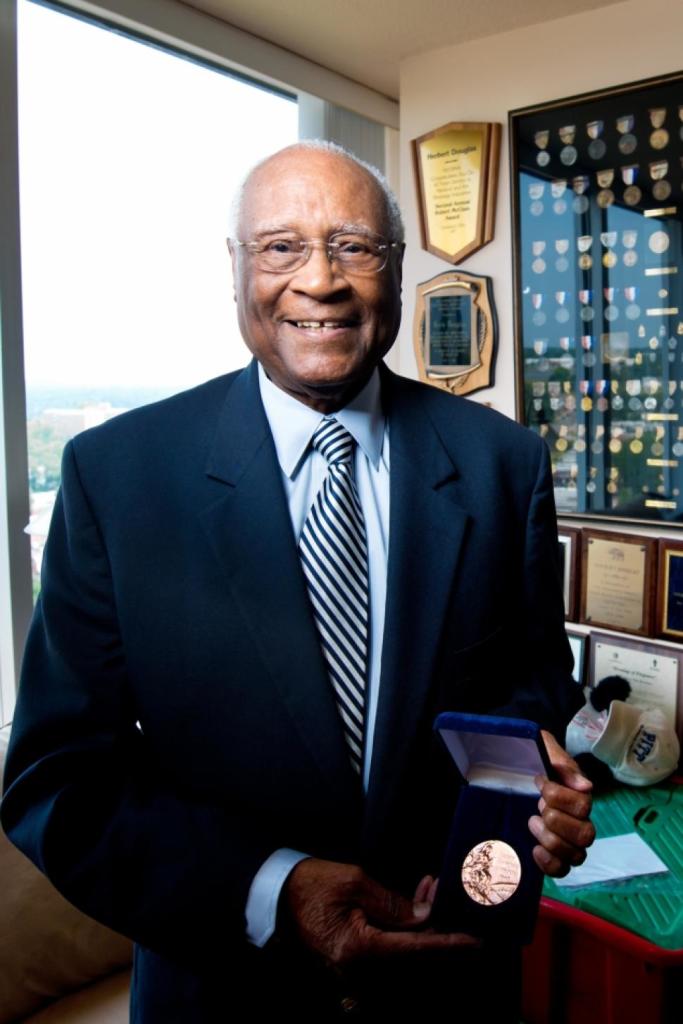 On February 19, 2016, Focus Features released the motion picture Race, a biographical film about Jesse Owens, who won a record-breaking four gold medals in the 1936 Olympic Games in Berlin. Owens was a childhood idol and later a close friend of Herbert P. Douglas, Jr., who, himself is an Olympic medalist and former corporate executive.

Born on March 9, 1922 in Pittsburgh, PA, Herb starred in high school in gymnastics, basketball, football and track & field. Later, he attended the University of Pittsburgh, where he captured three AAU and five intercollegiate championships and set a Pitt long jump record that lasted for 23 years. At the 1948 London Olympics, Herb won a bronze medal in the long jump, becoming the first Pittsburgh native to capture an Olympic medal.

After graduating from Pitt with a master’s degree in education, Herb began a career in corporate America working first for Pabst Brewing Company, and later Schieffelin & Co., distributors of Hennessy Cognac and Moet & Chandon Champagne. While at Schieffelin, Herb founded the International Amateur Athletic Association, Inc. and created the Jesse Owens International Trophy Award and the Jesse Owens Global Award for Peace in honor of his hero. Recipients of the Trophy Award include Eric Heiden, Ian Thorpe, Carl Lewis, Florence Griffith-Joyner, Sebastian Coe and Michael Johnson. Past honorees of the Global Award for Peace include Nelson Mandela, Ted Turner, Kofi Annan and President George H.W. Bush.

For years, I have had the honor of knowing Herb, who has been a mentor, advisor and close family friend. Although now in his 90s, Herb has not slowed down one bit and is often on the move. Recently, I was fortunate enough to catch up with Herb to get his views on the movie Race, athletic competition and life.

JF: Considering that Jesse was your childhood idol, how excited are you about the recent release of the film Race?

HD: I recently served as a commentator for the movie Race about my idol, mentor and friend Jesse Owens. It is the best film I have viewed that dramatizes his life as an athlete, a person and a family man.

JF: How did it come to be that Jesse became your idol?

HD: My first encounter with Jesse was when he was campaigning in Pittsburgh for Alfred Landon, a candidate for the President of the United States. As he was exiting the auditorium he put his arm over my shoulder. I immediately explained I was a track athlete and listed my accomplishments in the events in which he competed, and he responded that I did better than him at a corresponding age. I did not realize he was lying through his teeth until I researched his records later in life!

JF: If you could name three ways that Jesse influenced you as a young man, what would they be?

HD: Jesse inspired me to be an athlete, to be respectful and to give back.

JF: You went on to be a star athlete at the University of Pittsburgh and later you won a bronze medal in the

long jump at the 1948 Olympics in London. What was it like to win an Olympic medal?

When one competes in the Olympic Games and wins a medal you know you are one of the best athletes who performed on a world stage.

JF: After the Olympics you enjoyed a long and successful career in corporate America. What would you say were your keys to achieving success in the business world?

HD: You have to be prepared to take on and meet challenges by analyzing, organizing, Initiating and following through. These are the basics to follow.

JF: You created two awards in Jesse’s name, The Jesse Owens International Trophy Award and The Jesse Owens Global Award for Peace. What was the impetus for creating these awards?

HD: In 1935, [as he competed for Ohio State University in the Big Ten Finals], Jesse electrified the world by establishing three world records and tying one in not quite two hours. The following year, at the 1936 Berlin Olympic Games, Jesse astounded the globe on the world stage when he won four Olympic Gold medals. Incredibly, he did not win the Sullivan Award, which was given to the best amateur athlete in the United States. Jesse explained to me that not winning the Sullivan Award hurt him very deeply. When he passed, I founded these two prestigious international awards in his memory, which became my mission the balance of my life.

JF: You are currently the oldest living African-American Olympic medalist. How significant is that for you?

HD: As a nonagenarian I receive applauds because of respect. God has blessed me to earn this respect among my fellow Olympians which at times means more than winning a medal.