Pioneers of the Game: Eusebio

Eusebio da Silva Ferreira stands as the most famous name in Portuguese football (soccer) history.  Born in Mozambique, Eusebio was the first world-class striker from the African continent.  Known as the “Black Panther,” Eusebio scored more than a goal per game in Portuguese league matches (an incredible 320 goals in 313 matches).  As remarkable as that may be, perhaps his greatest work was revealed at football’s premier event, the World Cup.  In fact, during the qualifying rounds for the 1966 World Cup, Eusebio scored seven goals. He then went on to top that tremendous achievement by scoring an unprecedented nine goals in six World Cup matches in leading Portugal to a third-place finish.  To this day his performance stands as the greatest feat ever in World Cup play. In January 2014, Eusebio passed away at the age 71.  Although he is no longer with us, Eusebio yet remains the most celebrated name in the history of Portuguese football. 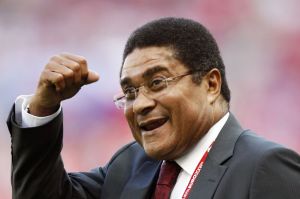