Trouble Ahead for NBA Jersey Ads?

In April, the NBA approved the sale of jersey sponsorships as part of a three-year pilot program beginning with the 2017-18 season.  The League believes the program will be a financial boon, with expected revenue projected at $100-$150 million a year.

According to ESPN.com’s Darren Rovell, teams will keep half of the revenue generated by their individual sponsorship sales, with half of that going into a revenue-sharing pool.  The other half will be split with the players.  Ads involving gambling, politics or alcohol are prohibited, as are sponsorships with competitors of key League partners, including broadcast partners ESPN, ABC and Turner; Spalding (the official ball); and Tissot (official timekeeper).

The Philadelphia 76ers became the first team to land a jersey sponsor, agreeing to a three-year, $15 million deal with StubHub. Immediately after the deal was announced, critics assailed the sponsorship program, claiming, among other things, that the ads cheapen the NBA brand and otherwise signify impending doom.  The critics are misguided. 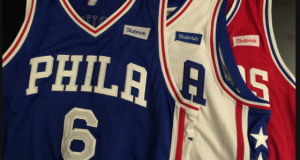 First of all, the ads measure just 2.5 x 2.5 inches, and will be placed on the jersey’s left shoulder. So the sponsorship patches will not dominate the uniform.  Players will not be plastered with huge ads, á la NASCAR. (It is worth noting, however, that beginning in 2017, Nike’s logo will appear on the jersey’s right shoulder in accordance with its deal reached last summer to become the League’s official outfitter).

Second, it’s not as if advertisements on athletes are a new phenomenon.  The WNBA has allowed jersey ads since 2009, MLS since 2007, and professional golfers have been walking billboards for decades.  It was just a matter of time before one of the “Big Four” sports leagues joined the party. Now that the NBA has made its move, the only question that remains is how long will it be before the NHL, NFL or MLB follows suit?

While we await the answer to that question, a much bigger issue may be on the horizon.  At some point a team will enter into a sponsorship arrangement that will conflict with an endorsement deal held by one of its star players.  For example, Los Angeles Clippers star Blake Griffin has a deal with car maker Kia Motors.  Imagine the controversy that would arise if the Clippers secured a jersey sponsorship with BMW or Lexus.  Kia would not take kindly to being ambushed by a deal spawned by a league-sanctioned program that interferes with the relationship with one of its key pitchmen.

How will such issues be resolved?  If the woebegone Sixers can get $15 million for its jersey ad, how much could the Clippers, Knicks, Lakers or Cavaliers fetch?  Would any of these teams walk away from a deal worth $50-$75 million (or more) because it may conflict with one of its player’s endorsements?  If not, how would this affect the relationship between the player and team?  Between the team and the player’s agent (who may represent other players that the team may be interested in signing down the road)?  Between the team, the league and the union?

While the critics moan about over-commercialization and the clubs rejoice with visions of millions dancing in their heads, a dark cloud has already formed on the horizon. How long before the storm hits, who knows?  But a storm is coming; it’s just a matter of time.