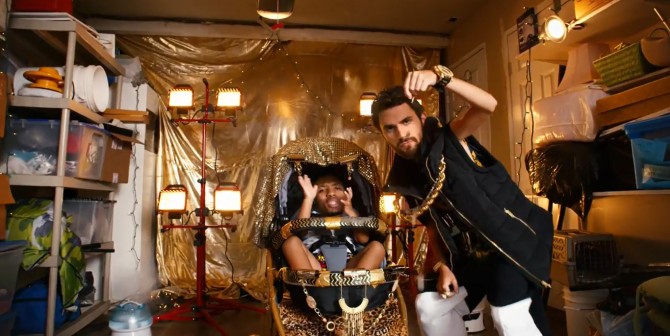 ​The NBA playoffs have been compelling as usual, with intriguing team matchups and outstanding individual performances. In addition, “Inside the NBA” continues to be the best studio show on sports television, hands down. To top it all off, the playoffs allow viewers to continue to enjoy one of the best commercials in recent memory – State Farm’s “Droppin’ Dimes.”

​The commercial features Portland Trailblazers star point guard Damian Lillard (aka “Baby Dame Dolla”) and Cleveland Cavaliers star Kevin Love as brothers rapping about how much money they’re able to drop – thanks to the family’s State Farm agent who saved them big cash by combining the family’s car and homeowner insurance. The commercial is, in a word, hilarious. I’ve seen it dozens of times during the NBA season and it still cracks me up. If you have yet to see it, take a quick look here.

​The spot is part of a campaign featuring “the Hoopers” (who, in addition to Lillard and Love, include fellow NBA stars Chris Paul, DeAndre Jordan and Kevin Garnett). It is the brainchild of Steve Stoute’s award-winning ad agency, Translation. But as much as Stoute and his crew deserve credit for their creativity and humor in creating the spots, the real stars are the NBA players. As a group, NBA players, perhaps more than any other athletes at the moment, are able to drive culture. Part of it has to do with the style and flair of the players, on and off the court, and their ability to connect with the fans, especially younger ones. The other has to do with the terrific job the NBA has done in marketing its players.

​MLB Commissioner Rob Manfred has stated that he wants to promote players more as a way of promoting the game. Whether that will result in more MLB players getting deals with national sponsors remains to be seen. NFL stars like Drew Brees and Payton Manning, along with NBA stars like LeBron James and Blake Griffin have demonstrated personality (and in some cases, a little acting ability) in a variety of commercial spots that have enabled fans to relate to them on deeper levels. The players’ success as pitchmen has increased their individual popularity, which in turn has generated increased interest in the games they play.

​The league offices would be wise to take full advantage of this dynamic. No matter how important the teams, the leagues and the state-of the-art venues may be, the ultimate driving force behind the success and increasing revenues in all sports are the players. The unique skills possessed by these elite athletes and their ability to compete at the highest level generate the interest that fuels the revenue. Increasingly, fans want to engage with players and feel more and more as if they “know” them. Whether it is NBA stars strutting into the arena or into the postgame press conference sporting fresh gear, or star players in popular TV commercials, the connection created with the fans is vital.

​If more players are given opportunities to drop dimes like Baby Dame Dolla, the players the leagues and its partners all stand to benefit. By working together they can grow their respective brands and take their sports to increasingly higher levels of popularity and revenue growth. In addition, such collaboration, when coupled with the creativity and originality of agencies like Translation, will lead to more memorable commercials and make the growing number of TV breaks a bit easier to bear.
​